Rattus norvegicus – Brown rats are the worst pests among the rodents. They are both hardy and fertile and can adapt themselves to extremely varying climates and environments. Brown rats are omnivores and like the humans’ waste products, they feed on cereals, nuts, fruit, vegetables etc. Rats are nocturnal and start looking for food shortly after sundown. If they are hungry they might also be seen during daytime. Rats normally require water on daily basis.

Rats make a mess and eat all kinds of food and animal feed. They gnaw on packing materials, on buildings, interior decorations and even on electrical wires. Rats transmit directly and indirectly several diseases, some examples include the buconic plague, trichinose, foot-and mouth disease and salmonella.

Appearance: Body size is between 11-29 cm, not including the tail which is 9-23 cm (normally shorter than the body though). Brown rats are greyish brown on their backs, lighter on their sides and grey-white on their bellies. The ears are short and hairy. They weigh 500-600 grams as adults. Their sharp teeth keep on growing throughout their lives and the rats thus have a constant need for gnawing on hard materials in order to keep their teeth sharp and strong. The long whiskers near their noses, as well as the sensory hairs on their bodies, are being used as tentacles when they move around in the dark along walls and in their nests.

Reproduction / progression: The females are pregnant during 21-23 days and may mate again within a day or two of their delivery. Females may get up to 6 – 7 litters per year with an average of 8 – 10 offspring. 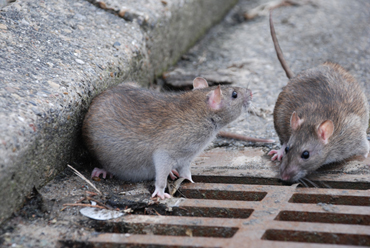