Ixodida – Ticks: is the common collective name for small wingless arachnids in the species group mites. Ticks are parasites which survive by sucking blood from mammals or birds, while simultaneously injecting a mildly anaesthetic venom. The hosts do not normally feel any pain.

Ticks may, after having filled themselves up on blood, swell up to the size of a bean. All ticks require three different hosts in order to fulfil their life cycle. The adult ticks become parasites on bigger mammals.

The young ones hang out on grass straws and in bushes, in particular at the tip of a long straw. From there they will attach themselves to warm-blooded creatures such as mammals and humans who happen to be passing by.

Appearance: The ticks are about 2-3 mm long themselves, but they may swell out to a length about 10 mm in just 9 days while bloodsucking. Their bodies have by then become so elastic that they bounce like tennis balls. The colour is white, bluish or brown, except for the dark brown, shining plate on the upper part of the back. The species Ixodes ricinus attacks primarily dogs, but also other mammals or birds.

Reproduction / progression: Ticks go through three different stages during their life. From larvae to nymphs and from there on to adult ticks. As larvae the ticks have only six legs, but when they grow up they get 8 legs which function as attachment devices. Ticks live 2-3 years and develop from tiny larvae of about a tenth of a mm to adults of 3-4 mm in length. They require blood to develop and grow. 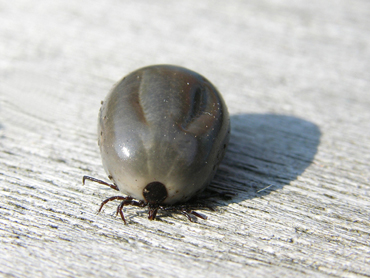