Musca domestica – The common House Fly is the most commonly occurring flying insect in households, it is also one of the animal species that is the most scattered around the world. Flies are annoying and unpleasant to humans and domestic animals alike. They soil with their excrement and spread infectious diseases. As the flies excrete saliva in order to digest solid food stuff, a great number of disease-carrying bacteria will follow suit. The consequence is the spreading of disease.

Appearance: The adult flies are about 5 – 8 mm in size. The body is greyish, with four dark longitudinal lines on the back. The lower part of the back is yellowish. The whole body is covered with fur. The faceted eyes are reddish. The females are slightly larger than the males and have a larger space between their eyes. As most of the two-winged creatures the flies have only one pair of wings.

Reproduction / progression: The females can lay up to 500 eggs, in five groups of 100 each. The females lay their eggs primarily in manure, kitchen waste and such like. The larvae are being hatched within just one day and they normally feed on dead and rotting organic material, such as kitchen waste and excrements. The adult flies have a life span of about a half to one month. Flies reproduce very rapidly. One fly may create up to 64 million offspring within three months.

The Silvalure Fly Control program contains all the products you need for controlling flies in your home or on your farm. 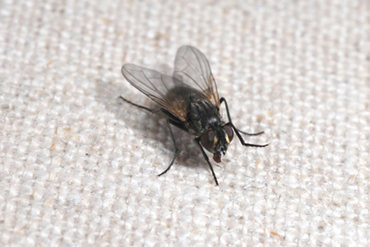