Culex pipiens – 2700 mosquito species are known to exist. The most common one is the Culex pipiens. Only the females are bloodsuckers. The females require blood in order to have enough nourishment for laying eggs. The males feed on nectar. Mosquitoes look for still waters, which are found on moors, rain barrels, sewers and suchlike. Adult mosquitoes enjoy resting in weeds and bushes.

Mosquitoes have an excellent sense of smell and react to smells such as carbon dioxide from human respiration and lactic acid. The human body also secretes a further 300 smelling substances, but the amount varies, which is why mosquitoes are drawn more to some people than to others. Mosquitoes are also using their sight in order to find prey as they can perceive motion. In addition to all this they react to infrared light, heat and moisture.

The annoying noise coming from mosquitoes is produced by the flapping of their wings. Females and males fly on different frequencies and thus their sounds are different.

When a mosquito bites it cuts a hole in your skin and a proboscis is being injected.

Appearance: A common mosquito weighs 2 to 2,5 milligrams and is about 7 mm long.

Reproduction / progression: The females lay their eggs in still waters. The eggs hatch within 48 hours. The larvae live in the water for a couple of weeks before they become pupae and develop into adults. The life span varies between species and is affected by ambient temperatures. By hot weather the process is quicker. The mosquitoes may be able to create up to 3-4 new generations between spring and autumn. Females of the last generation will hibernate in for instance outhouses and basements. 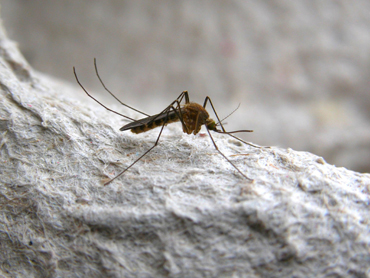