Arion lusitanicus – It owes its spectacular nickname “killer slug” to its aggressive and partly cannibalistic nature. Damages from feeding slugs can be found in almost all kinds of crops and plants. The Spanish Slugs are being spread out passively by above all that the eggs and the adults travel with transports of plants, soil and garden waste. In smaller areas the dispersion may also take place by own movements.

During certain years more of the species survive due to mild winters and humid summers. The slugs are most easily found in humid weather when the temperature reaches above 8-10ºC. The sexually mature adults die around mid autumn, while the younger ones seek shelter in cracks and crevices in the ground.

Appearance: The Spanish Slugs grow to about the same size as the adult Black Slugs (about 8-13 cm). The colour tends to be mainly a dark reddish brown, but it may vary widely from almost black over to all kinds of brown and red tints and orange.

Reproduction / progression: The Spanish Slugs lay eggs. The eggs are about 3,5 mm in diameter, and when they are newly laid they are transparent, but will turn a greyish white later. They are soft and are usually laid in lumps of about 30 – a total of about 400 from one slug a year. The eggs are commonly found openly on the ground, among leafs and on composts.

Slug Trap Final® is the solution to the nuisance of the killer slugs. 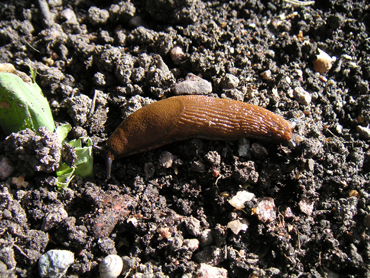